The fine line between BFF and happily-ever-after…

Tucker Llewellyn and Libby Worth—strictly platonic!—realize they’re each at a crossroads. Tucker is successful, but he wants a wife and kids: the whole package. Libby knows that small-town life has her set in her ways; the tearoom owner needs to get out more.

So they form a pact: Libby will play matchmaker and Tucker will lead her on the adventure she desperately needs. But the electricity Libby feels when they shake on it should be a warning sign. Soon the matchmaking mishaps pile up, and a personal crisis tests Libby’s limits. Will Tucker be there for her as a best friend…or something more?

And he invariably drank too much at their shared birthday party. When it came to liquor, he was a complete lightweight. He probably was about other things, too, but she loved him anyway.

“We’re thirty-four, although you are a day older than I am,” he said, reminding her of what she’d been perfectly content not thinking about. “You’ve been driving me home from birthday parties ever since high school. It’s my turn.”

“At least. The way I figure it, you need to drive me home until we’re in our fifties.” She waved when the front door opened, admitting Marie Williams and her daughter, Kendall. Marie had been in their high school class, and Libby thought resentfully that she still looked seventeen. She could probably still do the splits and be the top tier in a cheerleader pyramid if she was so inclined. “Do you want to take Jack some coffee?”

But Tucker didn’t answer her. His attention had already strayed. He went to greet Marie with a hug, seeming not to be in a hurry anymore. Libby shook her head, ignoring a ribbon of sadness the couple’s seemingly mutual attraction created at the back of her mind. She liked being single, always had, but sometimes it would be nice if someone looked at her the way Tuck was looking at Marie.

“Hey, Kendall.” Libby plastered on a smile for the twelve-year-old who’d gone to stand in front of the shelves holding the tearoom’s collection of cups and saucers. “Choose your cup and we’ll fill it with whatever you want to drink.”

“Can I drink soda out of these cups?” The adolescent reminded Libby of herself at that age. She was a little overweight and awkward in the bargain, and Libby sometimes had the impression she was a disappointment to her busy beautiful-people parents.

“You sure can. I drink water out of them all day long. Help yourself to whatever you want and give Elijah a good rub—I tossed him on the floor this morning when I got out of bed, and he’s feeling neglected. You want quiche when it comes out of the oven? It’s your favorite kind today.”

“Hey, Lib, can I get Jack a cup, too?” Tucker stood near the coffee urn. Marie went to join her daughter at a corner table.

“It’s been a whole three minutes since I asked you if you wanted some for him.” Libby moved to fill a cup for Tucker’s brother. “You picking me up at seven?” She smiled sweetly and tipped her head in Marie’s direction. “Or do you have another date by now?”

“Be nice.” He took the cup from her. “I’ll see you tonight.” He bent his head to peck her cheek as he always did, but she was turning to look at the door at the same time and the kiss landed on her mouth.

It wasn’t a peck, exactly. And Libby felt a little ripple along her spine.

Obviously she needed some caffeine to clear her head.

Liz Flaherty was a little nervous about retiring from her day job, but making quilts, more family time, traveling at the mere mention of “why don’t we go…” and becoming a Harlequin Heartwarming author have made the past years more fun and exciting than she could ever have imagined.

7 thoughts on “#BlogTour #Giveaway – THE HAPPINESS PACT by Liz Flaherty” 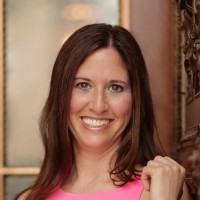