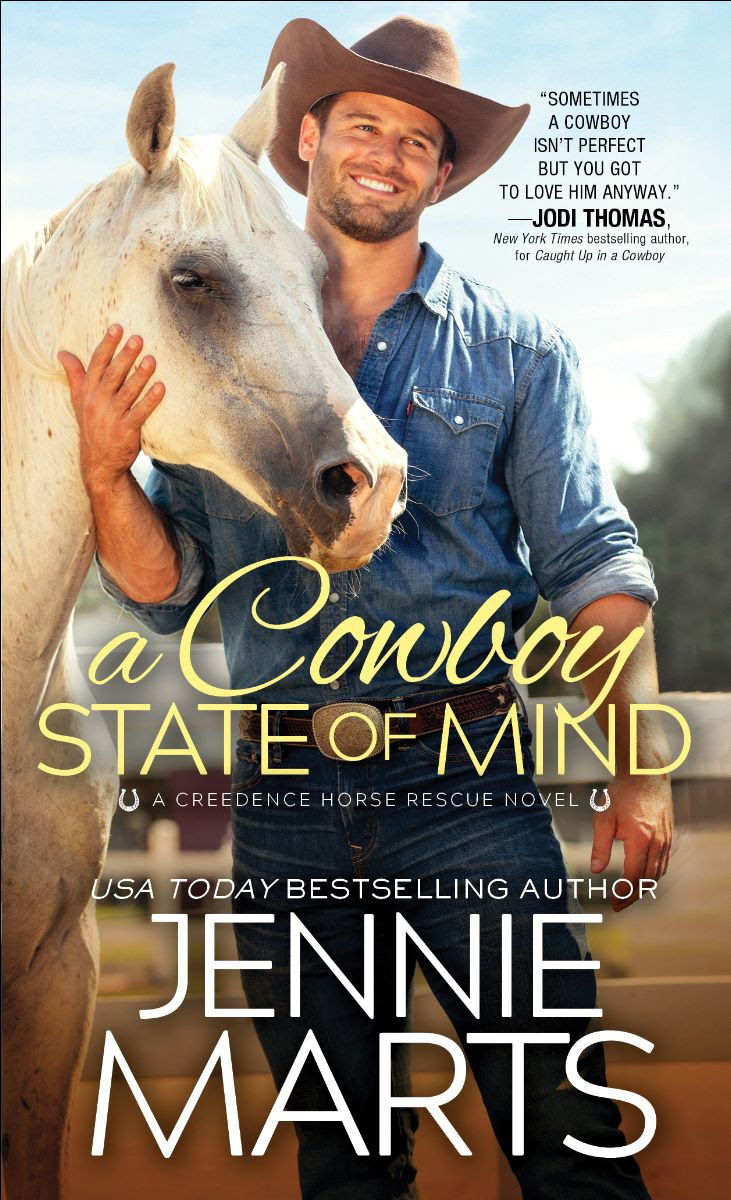 Zane Taylor has a gift for communicating with animals, particularly horses, but he’s at a loss when it comes to women. He’s a scarred and battered loner who has sworn off love—except he can’t seem to stay away from Bryn Callahan.

Bryn Callahan has a heart for strays, as evidenced by the assembly of abandoned animals that have found their way to her doorstep. But she is through trying to save damaged men. She vows to date only nice guys, which is a category that does not include Zane Taylor. Too bad he’s the one who sets her pulse racing every time she’s around him.

A chance encounter with a horse headed for slaughter brings Zane and Bryn together. Although starting a horse rescue ranch wasn’t in the plan, now Zane and Bryn have a chance to save not just the animals, but maybe each other…

The still-nameless dog jumped into the cab as Zane Taylor opened the door of his pickup, and he absently patted its head and rubbed behind its ears. The dog leaned into him and got that blissed-out look on its face, and Zane’s tension eased a little as it always did when he interacted with an animal. The late spring sun warmed Zane’s back, and as soon as he turned his attention away from the dog, he felt the weight of the decision he bore on his shoulders. His former boss, Maggie, had been nagging him to come back to his old job on her Montana ranch. She’d taken in a herd of wild stallions, and she needed him. He’d gotten by so far with vague replies, but it was time to give her an answer. Time to get back on the road and out of Creedence. Except the reason he was so fired up to leave was also the reason he wasn’t ready to walk away.

He shrugged the soreness from his shoulders. He’d had a good morning with Rebel, the headstrong black stallion he’d been working with for weeks now. Maybe the horse could feel the warmth in the air as well. Although it was Colorado, so they could still get a snowstorm or two before spring reluctantly slid into summer.

“Nice job today, horse whisperer,” Logan Rivers, his current boss, and friend, hollered from the corral where he was putting another horse through the paces.

Zane waved a hand in his direction, ignoring the comment, as he turned the engine over and pulled the door shut. He wasn’t fond of the nickname, even though Logan had been using it since they were in high school and working summers at Logan’s family’s ranch.

Zane could admit grudgingly that he did have a gift with horses, especially the dangerous or wild ones, somehow connecting with the animals better than he ever did with people.

The black-and-white border collie mix rested her head on Zane’s leg, and he stroked her neck as he drove toward Creedence, where no one was a stranger and everyone knew not just your business, but your cousin’s as well.

He lowered the windows and turned on the radio, contemplating the errands he needed to run after he grabbed a plate of biscuits and gravy at the diner. The thought made his mouth water. So did the thought of hopefully seeing a certain blond waitress who had been taking up way too many of his thoughts these last few months.

He slowed, his brow furrowing, as he recognized that same waitress’s car sitting empty on the side of the road. The car was an old nondescript blue sedan, but there was no mistaking the colorful bumper stickers stuck to the trunk. A bright blue one read “What if the hokey-pokey really is what it’s all about?” and the hot-pink one above the back taillight read “It was me. I let the dogs out.”

His heart rate quickened as his gaze went from the empty vehicle to a hundred yards up the road, where a woman walked along the side of the highway, her ponytail bouncing with each step and a light-colored dog keeping pace at her heels. Which was pretty impressive, in and of itself, since the dog had only three legs.

But then, everything about Bryn Callahan was kind of bouncy, and she was just as impressive as her dog. The woman was always upbeat and positive. Even now, with her car sitting busted on the side of the road, her steps still seemed to spring, and the bright sunlight glinted off her blond hair.

He drove past the abandoned car and onto the dirt shoulder as he slowed to a stop beside her. “Need a ride?”

She turned, her expression wary, then her face broke into a grin, and it was like the sun shining through the clouds after a rainstorm.

“Hey, Zane,” she said, the smile reaching all the way into her voice as she grasped the door handle. She looked steadily into his eyes, her gaze never wavering, never sliding sideways to stare at the three-inch, jagged scar starting at the corner of his eye and slicing down his cheek. Most people couldn’t keep their eyes off it, but Bryn acted as if it wasn’t there at all. “I sure do. I was supposed to start my shift at the diner ten minutes ago.”

She opened the door, and the dog bounded in, hitting the floorboards, then springing onto the seat to wiggle and sniff noses with the border collie. They could have powered a wind farm, the way their tails were wagging and their little butts were shaking.

“Hey, Lucky.” He leaned in as the dog leapt over the collie’s back and into Zane’s lap, where it proceeded to drench his face in fevered licks and puppy kisses. Lucky was like a hyper three-legged Tigger as he bounced from Zane’s lap back to the collie, over to Bryn, and back to Zane.

“Lucky, get off him,” Bryn scolded. She tried to push her way into the truck as she got her own slobbery reception from the collie.

Zane chuckled and grabbed her hand to help her into the cab. But his laugh stuck in his throat as heat shot down his spine and his mouth went dry. He swallowed and tried to focus on assisting her, instead of staring at the area of bare skin he glimpsed as the top of her dress buckled and gaped from her movement. It was just the side of her neck, but it was the exact spot he’d spent too much time thinking about kissing.

“Silly mutts.” She laughed as she tossed her backpack on the floor and plopped into the seat. Her hand was soft, but her grip was solid, and for a moment, he wondered what would happen if he didn’t let go. “Wow, what a greeting,” she said, as she released his hand to buckle herself in.

Zane’s eyes were drawn to her legs like bees to honey. The woman had great legs, already tan, and muscular and shapely from her work at the diner. Her white cross-trainers were scuffed with the red dirt from the road, and she had a smudge of dust across one ankle that Zane was severely tempted to reach down and brush away so he could let his fingers linger on her skin.

Bryn wore a pink waitress dress, the kind that zips up the front, with a white collar and a little breast pocket, and the fabric hugged her curvy figure in all the right spots. For just a moment, Zane imagined pulling down that zipper—with his teeth. His back started to sweat just thinking about it.

Simmer down, man. He took a deep breath, utilizing the stress-reducing exercise he’d learned in the military, and tried to think of something witty to say. He didn’t usually let himself get carried away with those kinds of fantasies. But he didn’t usually have Bryn in his truck, filling his cab with the sound of her easy laughter and the scent of her skin—traces of honeysuckle and vanilla and the smell of fresh sheets off the line on a warm summer day.

“That dog is serious about kissing. I haven’t had that much action in months.” He winked, then laughed with her, pulling his hand back to ruffle Lucky’s ears as the dog settled into the seat next to the collie. He tried to play it off like a joke, to settle his pounding heart, when what he really wanted to do was pull her into his lap and kiss her face and throat the way Lucky had done to him. Well, not exactly the same way.

Bryn snorted and scratched the ears of the collie, who was softly whining as she pressed into Bryn’s shoulder. “He’s just happy to see you. It’s been a while, ya know?”

“Well, Lucky has noticed you haven’t been around much.” She dropped her gaze and her voice as she focused on petting the dog. “We both have.”

“Are you saying you missed me?”

His shoulders slumped. Of course she hadn’t missed him.

She playfully nudged his elbow, and he felt the heat of her skin against his arm.

“Of course I missed you. You all but disappeared after the great Christmas pie bake-off in December.”

He chuckled as he shook his head. “I still can’t believe we made fifteen pies in four hours.”

“I still can’t believe you wore a frilly apron with a glittery cupcake on the front.”

He raised an eyebrow. “What other kind of cupcake is there? And I liked that glittery color. I’m thinking of having it added to the paint job on my truck.”

A laugh burst from her. “I dare you to.”

He let his voice drop and offered her what he hoped was a flirtatious grin. “I do enjoy a good dare.”

She chuckled, then lowered her gaze to the dog’s shoulder, where she scratched its fur. “So, why didn’t I hear from you? Was it something I said or did?”

Yeah, it was everything you did—everything that made me want and hope and wish for something more. “Nah. I was going to call you, but we got real busy at the ranch. Then I heard you started dating some rough-stock cowboy, and I didn’t want to overstep.”

“Is it overstepping to be my friend?”

He cocked his head, eyeing her. “Is that what you want me to be? Your friend?”

“Of course. I didn’t give you my number for you to not call me.”

Wrong question, dumbass. Should have asked her if all she wanted was to be his friend. He offered her a shrug. “I’m not much of a talker.”

“That’s perfect. Because I can talk up a blue streak, and I’m always on the lookout for a good listener.”

He chuckled. “I can do that. I can probably even throw in an occasional grunt of agreement just so you know I’m paying attention.”

She giggled softly, and the sound swirled in his chest, melting into him like molasses on a warm pancake. “That sounds great.”

Jennie Marts is the USA Today bestselling author of award-winning books filled with love, laughter, and always a happily ever after. She is living her own happily ever after with her husband, two dogs, and a parakeet that loves to tweet to the oldies, in the mountains of Colorado.