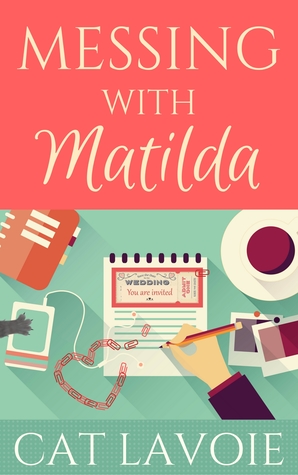 by Cat Lavoie
As a professional organizer in New York City, Matilda Hart wages war against chaos and clutter on a daily basis for her clients—and she vows to never let it invade her own well-ordered world.

But when her boyfriend decides to deviate from the path she’s been planning for them, Matilda’s perfectly structured life begins to crumble. She reluctantly finds herself back in the tiny hometown she fled a lifetime ago—determined to lay low and avoid running into anyone she used to know. So why is she reconnecting with her former best friend and putting up with the bridezilla antics of Amber, her high school nemesis?

When Matilda is tasked with keeping the bride-to-be’s heartbroken ex away from the ceremony, she discovers she has history with the man who’s trying to sabotage the wedding. Matilda quickly realizes that teaming up with cute and quirky—but hopelessly devoted—Silas Flynn could be mutually beneficial. He needs help wooing the woman he considers the love of his life and Matilda can’t pass up the chance to finally get back at the meanest of the mean girls by assisting Silas in his attempts to disrupt her wedding.

Will everything go according to plan for this mismatched pair? Or will working so closely together make uptight Matilda and laid-back Silas lose sight of their common goal?

One thing’s for sure—things are about to get messy.

This book has everything that I look for – romance, opposites attract, relatability, and a flowing storyline. I could so relate to Matilda with the importance of organization. As a natural planner, I could feel the dilemma that Matilda was facing when her boyfriend altered their plans and then having to go back to your small town – been there, done that! Definitely another a fun and quirky romantic comedy from Cat Lavoie! Grab this book and head to the beach for an afternoon of delightful reading! Don’t forget your sunscreen!

One thought on “#5Stars #Review – MESSING WITH MATILDA by Cat Lavoie”