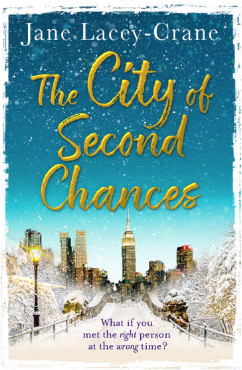 THE CITY OF CHANCES • JANE LACEY-CRANE

She’s already met The One, it was just that Mr Right came along at the wrong time….

Evie Grant is forty-five years old, a widow, and single mum of two children about to leave the nest. Suddenly alone in the family home, Evie realizes she hates her job, hardly goes out and hasn’t had a date since who knows when…

So it feels like fate when the opportunity arises for a girls trip to New York City. Staying with her sister on the Upper East Side, Evie is enchanted by a snow-covered city consumed by preparing for Christmas.

Bobble hat firmly on, Evie is walking through the city one day when she bumps into Daniel Roberts, Hollywood heartthrob and one-time boyfriend of hers. It’s now or never for Evie – could she open her heart to the possibility of a new beginnings and true happiness once again….?

Funny, real and wonderfully romantic, this is the perfect feel-good read to keep you warm this winter!