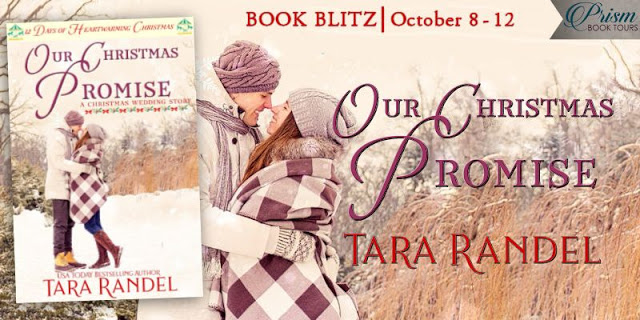 Release Blitz for
Our Christmas Promise
By Tara Randel 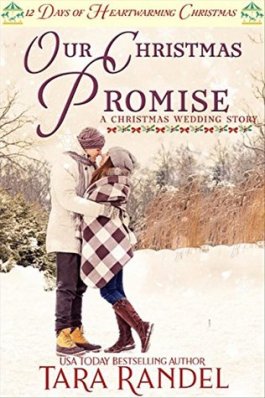 Melissa Upton and Justin Caswell have been best friends since they were kids. Now, they’re all grown up and things have changed, for Melissa at least. She’s content running the family bridal shop, Candlelight and Lace. Excited about an upcoming wedding. She doesn’t even mind attending weddings with Justin, until he dubs them wedding buddies. And now that he’s back in Christmas Town, Melissa realizes she wants more. If she goes after her heart will she lose her best friend?

Justin is back home to take care of business for his estranged father while he recovers from a heart attack. He’s launched his own successful career, is happy with his single status. Until he feels the distance Melissa has put between them. What’s up with his best friend? The more time they spend together, involved in Christmas Town holiday preparations, the more he realizes she’s hoping for more in their relationship. Can Justin see that being in love, and remaining best friends, is the best of both worlds?

Jaycee tossed a paper towel in the trash and met Melissa’s gaze in the mirror over the sink.

“When are you going to tell him?”

“Tell who what?” Melissa asked as she dug in her bag for lip balm.

“Tell Justin you have feelings for him.”

Melissa froze. Blinked a few times and glanced at Jaycee. “What are you talking about?”

Jaycee rested her hip against the counter and crossed her arms over her chest. “Don’t play dumb with me. I see how you look at him, especially when he doesn’t know it.”

Melissa shrugged and resumed her searching. “What more could there be?”

“There’s nothing to tell.”

Melissa gripped the tube of balm in her fingers. “I date.”

“Name the last time you went out with a guy.”

She racked her brain but came up empty. “College, maybe?”

“That was six years ago.”

“Wait. I went out with Roger Pierce for a while.”

“Until he moved away.” Jaycee shook her head. “I’m telling you, you have it bad for Justin.”

Did she? Did that explain the tingles she’d been trying to ignore? Or had she been without a significant other for too long now?

Slowly spreading the balm across her lips, Melissa met her own gaze in the mirror. Clear brown eyes peered back, but a rosy red had crept into her cheeks. She recognized the look, had seen it on dozens of bride’s faces through the years.

Good grief, was she in love with Justin?

“Do you care for him as more than just a friend?” Jaycee asked when Melissa had been quiet too long.

Despite her words, Melissa flashed back to that Christmas Eve many years ago when they’d promised to be friends forever. How they’d carried through on the vow, remaining friends through high school and stayed in touch when he left Christmas Town for college. She understood why he didn’t return, so she’d made sure to visit him in Boston. Once their friends had started to marry, meeting up at weddings had become their thing. But was that good enough for her now?

Tossing the tube back in her purse with more pressure than she intended, Melissa closed the bag. Pushed her unsettling thoughts away. “You’re imagining things.”

With a shrug, Jaycee pushed from the counter. “If you say so.”

“I say so,” she said, yanking the door open to return to the raucous, overcrowded pub.

USA Today Bestselling Author Tara Randel has enjoyed a lifelong love of books, especially romance and mystery genres, so it didn’t come as a surprise when she began writing with the dream of becoming published. Family values, mystery and, of course, love and romance are her favorite themes, because she believes love is the greatest gift of all. Tara lives on the West Coast of Florida, where gorgeous sunsets inspire the creation of heartwarming stories, filled with love, laughter and the occasional mystery.