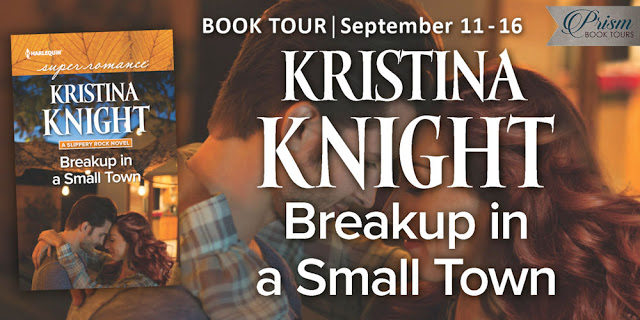 We hope you enjoyed the tour! If you missed any of the stops
you can see snippets, as well as the link to each full post, below:

Launch – Note from the Author

Hi, everyone! I’m so excited to be back with you all for the next book in my Slippery Rock series! Breakup in a Small Town picks up about three months post-tornado. Adam is home from the hospital, but things aren’t right for him. . .and things are definitely not right for Jenny, either…

I am a sucker for a great movie couple – Joan Wilder and Jack T. Colton (Romancing the Stone), Vivien and Edward (Pretty Woman), and Jack and Rose (Titanic) are all on my list. I like couples that banter, couples that laugh together, couples that are hot for each other…even if they’d lost a little of that sparkle.

Here are a few of my favorite movie couples…

It’s All About the Romance – Author Interview

Do you have any personal heroes/heroines?

I do! I find Nora Roberts’ dedication to writing inspiring, and I’m awed at everything Lisa Kleypas does. I have a friend (Hi, Heather!!) who has started a handmade greeting card company – she writes amazing, inspirational, heartfelt cards that are simply beautiful.

Last but not least, my sister-in-law, who became a runner for the first time over the age of 30, has run in marathons and half-marathons, and helped me through my first 5K this summer (Hi, Janell!) is one of the most genuine people I know, and I admire her so much!

underneath the covers – Excerpt

“It occurs to me that I’ve been too soft on you.” Jenny said the words carefully as she pulled to the stoplight outside Mallard’s Grocery. No inflection. No anger. Just words. Calm, cool, concise words. From the corner of her eye, she saw Adam’s head snap in her direction. Maybe this change in tactics was a good idea. “I don’t like this any more than you do, and I know you have it much worse than me because you’re living it. But I’m living it, too.”

Thoughts of a Blonde – Review

“Turmoil and heartache snare our attention with this latest dip into Kristina Knight’s Slippery Rock series. If you’ve read the previous books, you will recognize Adam and Jenny and already be familiar with what happened to him. I was hooked on the story just from enjoying the series, but watching them fight for their relationship kept me even more enthralled. She was hard to like, but I enjoyed their story.”

He liked the prickliness even less than he liked that look he’d seen in Jenny’s beautiful eyes a moment before.

“This book had me on the edge of my seat. I was not sure what was going to happen between Jenny and Adam. Stay together or stay apart? It was nice reading about a couple that was married already and facing a life event that changed so much in both Jenny and Adam’s life.”

It took her asking me to leave to see how much I wanted to stay. How much I wanted her, and I had no idea how to get her back. I needed a plan, and I’ve never been much of a planner. Things just kind of happened for me: I played football and happened to be good at it, I took a job with my dad because I enjoyed it, and I married Jenny because she took my breath away. I never had to work hard at anything.

I had to work hard to win her back, though. Here’s how I did it…

“This is all about you.”

“I sent you flowers to apologize.”

“I hate cut flowers. I’ve never once asked for cut flowers. I didn’t carry them when we eloped. I don’t keep them in vases around the house.”

“You work in the garden all the time.”

“Because I like plants,” she exclaimed, unable to keep the annoyance from her voice.

“This book was hard to read, but rewarding at the same time, because Adam and Jenny do (eventually–talk about waiting until the last minute; argh!) figure it out. And watching two people who have been together forever but are just finally figuring out how to really be together at last makes for one heck of a story.”

Her gaze met his, and it didn’t matter that she’d asked him to move out. That their marriage might be over. What mattered was the look in his eyes. The green darkened to nearly emerald, and seemed to cut right through the confusion she felt at what she wanted, professionally and personally. All that mattered was that, for this moment, the two of them were together. He’d come out of the shell she had begged him to exit.

“I should have been paying more attention,” she admitted.

“I should have ducked. My reflexes are a little slower than I remember.” But he didn’t seem upset by that fact. A few weeks ago, slower reflexes might have sent him into a days-long funk. He put his arm around her shoulders. “I’m okay, Jenny.”

“If a tornado can’t break me by collapsing a building on my head, you’re not going to do it with an umbrella.”

“I just adored this book and this series is fast becoming one of all time favorites. The characters are vivid, emotional, funny, realistic and it’s always fun to go back and see where the other characters are in the town. And I can’t wait for Aiden’s story; whenever that may be. Again, I just loved how Ms. Knight made the story so realistic, emotional, at times raw and I truly felt sympathetic to both characters. I was cheering for them to the very end. And what an ending it was. *sigh, swoon, sniffles*”

Falling in love is the easy part. I didn’t know that until my life fell apart a couple of months ago, but what I’ve realized is that falling in love? It’s easy. A romantic gesture, candlelight, focused attention . . . those things make it so easy to fall in love with another person.

Staying in love? That is a whole different battle. So, if you were in love but now you think love might have left you behind? Here’s what you do…

She had to figure out what she wanted, without Adam’s hands in her hair, making her wish for things that just weren’t true. She had been frustrated before the accident. She wanted more than to take the kids to school and pick them up. To cook the meals and clean the house. She wanted to go on dates with her husband. There had to be more to life than being a mom and a housekeeper.

Inside the Mind of an Avid Reader – Review

“Breakup in a Small Town is the third book in the Slipper Rock series by Kristina Knight. I can’t help it I absolutely love every single visit I make to this town. I don’t know what it is but Kristina always blows me away. Jenny and Adam’s story is no different. This couple has been through so much and this has caused a rocky marriage. . . . You will adore this series. I recommend all three books!”

And don’t forget to enter the giveaway below, if you haven’t already…

This isn’t the man she married…

Jenny Buchanan never considered what “for better or for worse” meant when she married Adam Buchanan at nineteen. Six years and two little boys later, “for worse” arrives in the form of a tornado that ravages Slippery Rock and injures Adam. Now he’s a stranger to his family…and love won’t be enough to bring him back.

Only when Jenny asks him to move out does Adam become the husband she needs…but Adam isn’t the only one who’s changed. As their attraction sparks back to life, Jenny and Adam must learn what it is to grow up—and grow together—before this small-town breakup lasts forever.

Lifestyles of the small-town famous

Forced to leave Nashville after a scandal, Savannah Walters has come home to Slippery Rock, Missouri, with a bruised ego and her singing career in jeopardy. As if that isn’t humiliating enough, on her way into town she’s rescued by her swoon-worthy childhood crush, Collin Tyler.

His hands are full running the family orchard and dealing with his delinquent teen sister, so Collin doesn’t need to get involved with someone as fiery and unpredictable as Savannah. But the intense attraction between them can’t be denied. And when disaster strikes, they’ll both be surprised by who’s still standing when the dust settles.

He’s not giving up his family without a fight

James Calhoun has never been able to resist Mara Tyler, or her knack for mischief. Her reputation as a reckless teenager drove Mara from their hometown. So Slippery Rock is the last place James ever expected to see her, and Mara’s timing couldn’t be worse. With the upcoming election for sheriff, she threatens the squeaky-clean image James needs to win. Because Mara has brought with her the result of their steamy affair: his two-year-old son, Zeke. After the initial shock, James is determined to have both his family and career. He just needs to convince Mara that her home is where it’s always been. With him.

Running out on her wedding was the best decision ever!

A cheating fiancé sends Camden Harris fleeing to her grandparents’ home in Missouri. When her ex follows, determined to win her back, Camden makes a deal with neighbor Levi Walters: they’ll pretend to be in love and she’ll support his plan to buy her grandparents’ land.

The boy from her childhood has grown up into an impressive man. His charm, good looks and sweet gestures make it difficult for Camden to remember this is fake. And Levi’s kisses only confuse her more.

Once upon a time, Kristina Knight spent her days running from car crash to fire to meetings with local police–no, she wasn’t a troublemaker, she was a journalist. Her career took her all over the United States, writing about everything from a serial killer’s capture to the National Finals Rodeo. Along the way, she found her very own Knight in Shining Cowboy Boots and an abiding love for romance novels. And just like the characters from her favorite books, she’s living her own happily ever after.

Kristina writes sassy contemporary romance novels; her books have appeared on Kindle Best Seller Lists. She loves hearing from readers, so drop her a line!