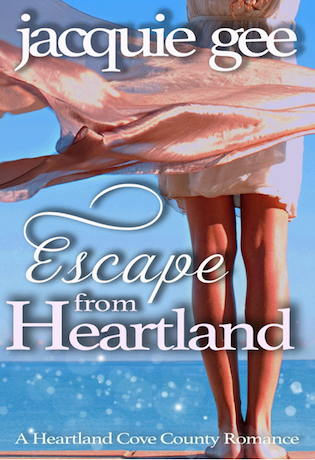 We hardly know each other, yet somehow, on some unexplainable level, it feels like we’ve known each other forever.

Jules Bates is a fish-out-of-water in conservative, small town, Heartland Cove. A modern girl with modern dreams that have so far taken her all the way to father’s bait shop at the end of town. There, she spends her days, elbow-deep in worm dirt. She can’t remember the last time she’s been on a date, or dressed in anything but a lumberjack shirt and hip waders. Her life seems to be at a stalemate. It’s like her best friend said, “The perfect guy doesn’t just walk through your door and sweep you off your feet, you know?”

Jayden Sievert is on a mission, to solve the mystery of his life. But first he needs to track down a ghost. One in particular. The legend of Heartland Cove. Arriving in the small town, with his ghostbuster wannabe equipment in hand, he purchases the Caldwell place, much to the horror of the townsfolk—a stately Georgian Manor overlooking the sea, with a less than pleasant past. No one’s been brave enough to set foot in that place for over a decade.

Is this man mad? Or perhaps just a little crazy?

Jayden ignores them all. He knows the key to his success lies in his ability to minimize distractions, but then he meets Jules. Could she be the answer to the long-buried secret that Jayden’s spent a lifetime searching for?

The second in the series of sweet romances set in fiction Heartland Cove, this contemporary coming-of-age romance features a deliciously unexpected paranormal twist!

“Maybe she was here and left. I was supposed to be here sooner. Maybe she thought I was a no-show.”

“Maybe. But she would have texted. Anna’s not one to give up that easily on a sale.”

“Well, then, I guess we’d better keep looking for her.” I lean against the doorjamb, feeling the cold air encroaching on us again.

The muscles along the sides of Jules’ jaw twitch, as lightning snakes across the front bay windows. Then, without warning, the air hits Jules in the back, tossing her forward into my arms. I instinctively catch her as thunder strikes and it appears she’s leapt into my arms because of it, but it’s actually the ghost at play. He’s tossed her into my arms.

“What was that?” Jules cranks around looking very distressed.

“I dunno for sure.” I shake my head. “But you better stay close.”

She clings to my chest. No argument there.

Lightning strikes again and thunder crashes. “She’s an angry one and she’s close.”

“Is this a typical Maritime thing?”

“No,” she snaps, trembling. “I don’t remember rain even being in the forecast!”

Another crash of thunder and she scowls, looking deeply troubled. It sounds like it’s hitting right outside the door. “You’re right.” Jules’ eyes look like they’re about to pop from her head. She talks a mile a minute. “Anna must have left. Otherwise, we’d have seen her jeep. She can’t be here, or she’d answer me. We should go.” “She whirls around, ready to bolt from the building, and I catch her by the waist.

“Whoa, whoa, whoa…” I say into her ear, pulling her to me, her feet still kicking. “No sudden movements, my friend. Besides, we can’t go out there right now in the middle of all this.” I look again to the lightning streaking the panes of the windows, like fireworks now. Every window of the house is affected, illuminating in rapid sequence. Thunder booms all around us, shaking the rickety old structure.

“Well, we can’t very well stay here.” Jules glowers into my eyes, as I lower her to the floor. “I’ll take my chances.” She turns, about to bolt again, and a particularly loud crash of thunder sends her screaming back into my arms.

“I think it’s best if we let things die down out there a bit.”

“I think you’re right.” She buries her face in my chest. Her skin is warm and soft in contrast to the cold air around us, closing in tighter with every moment.

Jules looks up as lightning slashes the windows again. She lets out a small shriek and digs her nails into my chest.

“It’s only a storm,” I say, trying to comfort her.

“I don’t think so,” she gasps. The lights above the staircase flash on and off again. A strong crack of thunder hits, driving a gasping Jules to crawl the fronts of my shins. “Okay, look,” she says, breathlessly, fearfully, staring up into my face. “There’s something I should have told you. This place is haunted, okay?” Her words come out fast and slightly garbled, her voice trembling as hard as her hands. “I probably should have told you that on the drive up here, but Anna said she really needed the sale, and there was the possibly of her winning the trip to Hawaii to consider and—”

“You know about the trip to Hawaii?”

“You do? And you came to look at it anyway?” Jules scowls. Her voice cracks.

“And you’re a very good friend, by the way.”

Thunder crashes again and she snuggles close. The cold air presses us even closer.

“I’m… ah…” I start, feeling as though I owe her some sort of explanation. I can’t tell her all of it, but I should tell her something. “I sort of fancy myself a bit of a paranormal sleuth,” falls out of my mouth. It’s not completely the truth, but it’ll have to do for now. I feel guilty lying to her, but I swear when this is all over, I’ll tell her the truth.

“So, like a ghostbuster wannabe, is that it?” Jules pulls back, her voice nearly shrieking.

“You knew this could happen, and you dragged me up here?”

“No!” I frown. “I—I had no idea this would happen.” I run a flustered hand through my hair. What does she think I am, a monster?

“Unbelievable.” She drops her hands from my chest. “I knew this was too good to be true.”

“Never mind.” She turns her back to me.

“Look, i-if it’s any consolation, this is not what you think.” I move closer. “It’s not voluntary. I have a gift or something. I—I see things—”I stammer, trying to explain the unexplainable.

“Omigawd, you see dead people?” She melts away from me.

She glares back at me, panicked.

“Okay, no, that’s not it.” I put up a hand. “No, that’s exactly it.” Jules gulps. “But only sometimes, and especially when they’re related to me—”

“Fantastic. So, what? You know the guy that haunts this place?”

“In a roundabout way, yes.”

The wind picks up, throwing the chimes that hang on the porch outside sideways into the wall, causing both our heads to snap around. A second gust of wind drives the chimes into the door and Jules back into my arms. The cold air intensifies, engulfing us like a blanket.

“It’s a long story,” I whisper in her ear. “Maybe I’ll tell you sometime over a beer—”

Jules screams. “I have to get out of here!”

“No, wait!” I reel her back when she tries to run again, catching a flash of green glowing light out of the corner of my eye. I pull her even closer than before.

“So, let me get this straight,” she clings, her breath jagged. “You make a living by talking to dead people?”

“But that’s why you’ve come to the Cove. To talk to a dead person.”

“One in particular, yes.”

“Well, I was hoping this could wait till our second date, but, okay …” I glance briefly at the floorboards then back up into her eyes. “I came to talk to a ghost about my heritage. I’m hoping to find out exactly who I am.”

Thunder cracks so loud it drowns me out. I’m not sure that she’s heard me.

“I dunno for sure.” I glance around.

Thunder booms and lightning flecks like a light show. Hinges creak, and both our faces snap around and stare at the door, gape-mouthed and terrified, as it grates slowly open, revealing the raging storm outside. Wind howls within. The door gasps open and closed.

“I think it wants us to go.” Jules swallows as lightning wildly stripes the sky.

“I think you might be right.” A blast of thunder shakes the floorboards, and I grab her hand and step forward, as the door slams furiously shut, and the lock falls with a clunk. Jules’ body shakes at the end of my arm. “What do we do now?” 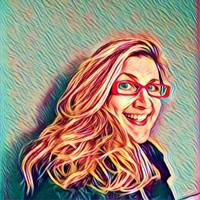 Jacquie Gee is the alias of Jacqueline Garlick. Maybe you’ve read her?

We are one and the same. Two faces of one author with very different writing styles. That way, I keep readers happy by keeping my writing passions separated.

On a personal note, I love to talk… strange for a writer, I know, but I do. I’m told I can be pretty funny, though, my kids see things in a different light. I love to write romances with a strong, sassy, heroines, and scrumptiously, gorgeous leading men. I write sweet romance surrounded by chocolate and an overweight sheltie. Neither of which are related. And there are always with fresh flowers in the room. Raised in a small town in the country myself, I like writing about them best. I mean, who doesn’t love a small-town? Enough about me, what about you?

Drop me a line and let’s get to know each other.

jacqueline@jacquelinegarlick.com I love to hear from readers!

One thought on “#BookBlitz #Giveaway – ESCAPE FROM HEARTLAND by Jacquie Gee”