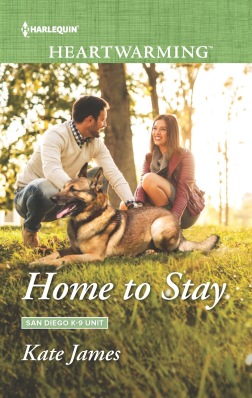 A missing little boy triggers San Diego K-9 officer Shannon Clemens and her canine search-and-rescue partner into instant action. For the rookie cop haunted by a childhood tragedy, bringing Sawyer Evans’s son safely home is more than a job. It’s a mission she can’t fail… But forging a friendship with the father is a tactical error that could compromise her first solo assignment. Yet the deepening bond between them is almost impossible to resist…

When the police officer didn’t answer his question right away, Sawyer scrabbled around to face her and grasped her upper arms. “What do you mean Dylan didn’t wander away?”

Her eyebrows furrowed and she glanced down to where he was gripping her.

Only then did he realize he was holding her and not gently. He immediately released her. Seeing the distinct marks left by his fingers below the short sleeves of her uniform shirt, he was dismayed. “I’m sorry. I’m so sorry…Officer,” he mumbled.

She rubbed a hand over the spot on her arm. “It’s okay. And it’s Clemens. Shannon Clemens. We followed a trail to a service road. We think your son was put in a vehicle there.”

Sawyer slumped back on his heels. “Someone found him? Have you checked to see if anyone’s reported finding him? To the rangers or the police?”

“Yes. Neither the park rangers nor the SDPD have received any report of a young boy being found.”

“But you think someone put him in a vehicle and…took him?” Sawyer couldn’t believe what he was hearing. If someone had found Dylan, lost and alone, surely that person would have taken him to the rangers’ office or the police by now. And if not? As he realized what she was saying, the horror of it threatened to overwhelm him. “You think he’s been…kidnapped?” he asked, his voice raw.

“We think someone took Dylan. The distance he would’ve had to travel to the service road, especially in bare feet, is too far. He was probably carried, if not all the way, then part of it.” Shannon nodded to her captain, who’d just joined them, before continuing. “Based on the behavior of the dogs, we suspect a person or persons put him in a vehicle at that location.”

Sawyer staggered to his feet. Turning his back on the cops, he dragged the fingers of both hands through his hair.

He was fairly certain this was what losing one’s mind felt like. His son was missing—might have been abducted—and there wasn’t a thing he could do about it. After Jeannette had left them, he’d sworn he’d protect Dylan and give him enough love for two parents.

He stumbled to the edge of the water and stared off into the distance.

Was this some incomprehensibly cruel joke the powers that be were playing on him? Three years ago, his wife went missing and now his son? Jeannette might be lost to him, but he had to get Dylan back. Whatever it took. If not, he really would go insane.

If Dylan had been abducted, who would’ve done it?

A male voice, so the captain, not the officer. Sawyer spun around.

“It might be advisable for you and your family to go home. We’ll need to ask you some more questions, but we can do it there.”

Sawyer looked around and noticed that the campsite was now being treated as a crime scene. There were more cops present and yellow do-not-cross tape had been used to cordon off the area.

“Dylan…” he whispered and turned imploring eyes on Shannon.

“There’s nothing more you can do for him here,” she said softly. “If he was abducted, you should be home near your phone.”

He nodded. “I…I have to tell my parents and Meg.”

“Okay. Then we’ll have someone drive you home. You can get your vehicle some other time. It’ll be fine here until then.”

“Sure. Yeah.” Didn’t they understand that he didn’t care about his damn car?

All he cared about was getting Dylan back.

Kate spent much of her childhood abroad before attending university in Canada. She built a successful business career, but her passion has always been literature. As a result, Kate turned her energy to her love of the written word.

Kate’s goal is to entertain her readers with engaging stories featuring strong, likable characters. Kate has been honored with numerous awards for her writing. She and her husband, Ken, enjoy traveling and the outdoors, with their beloved Labrador Retrievers, Harley and Logan.

Kate would love to hear from you! You can connect with her by email, through her website, her Facebook page, Twitter, or mail at PO Box 446, Schomberg, ON, L0G 1T0, Canada.

Signed Books:
· Six winners who comment on any of the blog posts, will receive a signed book (US/CAN) of their choice from the first three books in the San Diego K-9 Unit series, When the Right One Comes Along, When Love Matters Most, or When I Found You.

11 thoughts on “#BlogTour #Giveaway – HOME TO STAY by Kate James”