Will they be able to lay the past to rest and rekindle their love from the ashes?

BEWARE THE RANGER
In the Long Arms of the Lawman #1
Debra Holt
Releasing June 28, 2017
Tule Publishing

Twelve years ago, Kaitlyn Russell had a dream: living happily ever after with Clay Morgan. Except her grandmother had bigger plans for her beloved granddaughter and they didn’t include life in the small town of McKenna Springs as the wife of a young, poor deputy. Kaitlyn’s heart was broken when Clay and her grandmother convinced her to pursue her second love, Broadway stardom.
Texas Ranger Clay Morgan is a widower with a young son to raise. A dozen years before, he had to make the most difficult decision of his life when he agreed to let go of the only woman he’d ever loved so that she could pursue her dreams.
Now, fate and an old woman’s guilty conscience conspire to bring Clay and Kaitlyn back
together once more. Will they be able to lay the past to rest and rekindle their love from the ashes?

“Miss Russell,” he said as he handed back her license. “Can you step out of the car, please?”

“What is the problem, Deputy…Trooper, I mean?” Angie asked as she leaned across the center console to look up at the man who turned his officious smile in her direction.

“There’s someone on his way that will let you know what it’s all about. Miss Russell, if you would please…?” His hand went to the door handle.

Popping the door’s release, Kaitlyn opened it and stood. Her patience was beginning to grow thin.

Not one to leave her friend without support, Angie exited her own side and watched the scene from there, lending her friend her support.

“How long is this going to take? I really would like to know what this is about.” Kaitlyn fought to keep her voice controlled. She never liked guessing games.

“Well, ma’am, I think you’re about to get some answers.” As he spoke the words, he nodded over her shoulder.

They all turned to look. What the—? She was surprised to see a sleek, dark blue helicopter moving swiftly toward them. Kaitlyn raised her hand above her eyes to block the glare of the sun. She tried to make out the markings on the craft, but to no avail. What on earth was going on?

“This day is finally getting interesting again,” Angie spoke up. “Do you think they could give us a lift to New Mexico?”

“I’m glad you’re finding this amusing because I’m not.”

“That’s because you always like to be the one in control,” Angie responded with a slight toss of her head and a knowing grin.

“Yes, I do. I admit it. This person better have a quick explanation so we can be back on our way.”

The helicopter made a pass overhead then descended and swung back in a wide arc. In a few brief minutes, the pilot had easily set it down a few hundred yards distant on the side of roadway.

As the blades began to slow, the passenger side door opened. Another trooper stepped down from the craft. She moved toward them, the other trooper acknowledging her arrival with a slight nod of the head.

She nodded to both Kaitlyn and Angie before moving to stand beside her male counterpart. Obviously, this was not the person with the answers for them.

In that moment, the world imploded. Everything she had trusted to not change was shattered. Time came to a screeching halt. She literally froze in place. It would be sometime later when she tried to remember if she even managed a breath of air. Everything waited…waited on the tall male figure who had stepped out of the pilot’s side door and was advancing slowly toward her. 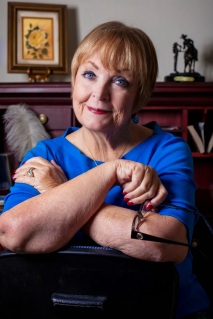 Born and raised in the Lone Star state of Texas, Debra Holt grew up among horses, cowboys, wide open spaces, and real Texas Rangers. Pride in her state and ancestry knows no bounds and it is these heroes and heroines she
loves to write about the most. She also draws upon a variety of life experiences including working with abused children, caring for baby animals at a major zoo, and planning high-end weddings (ah, romance!).Debra’s real pride and joys, however, are her son, an aspiring film actor, and a daughter with aspirations to join the Federal Bureau of Investigation. (more story ideas!) When she isn’t busy writing about tall Texans and feisty
heroines, she can be found cheering on her Texas Tech Red Raiders, or heading off on another cruise adventure. She read her first romance…Janet Dailey’s Fiesta San Antonio, over thirty years ago and became hooked on the genre. Writing contemporary western romances, is both her passion and dream come true, and she hopes her books will bring smiles…and sighs… to all who believe in happily-ever-after’s.

Debra invites you to visit her website. She loves to hear from
other aspiring authors or readers via her email.