On tour with Prism Book Tours 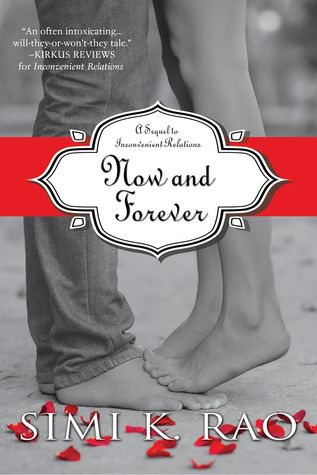 Can Shaan and Ruhi face their biggest fears and unite together?

Shaan and Ruhi Ahuja, very much in love Indian newlyweds, discover each other in Simi K. Rao’s Now and Forever—the sassy and sexy sequel to Inconvenient Relations. After getting the scare of their lives while traveling in the Grand Canyon, Shaan and Ruhi go back home to one dilemma after another. Shaan’s job is in jeopardy, and one of Ruhi’s closest friends, Sunshine, needs her. How will Shaan and Ruhi handle life’s hurdles, while still trying to get to know each other as husband and wife? Will they be able to forsake all others and consolidate their relationship?

It was a lovely dream. The loveliest Ruhi had ever had. It had to be a dream, because how could something so wonderful be true?

The occasion was the annual Quiz Show and she had been chosen to represent their high school as the most likely candidate to win back the coveted trophy they had so narrowly lost to Mt. Carmel last year. Everyone was sure she was the only one who could do it.

Not just everybody, she was, too, because she always won everything. Ruhi was invincible.

She was oozing with confidence, egged on by the looks of nervous despair on the opposing team members’ faces (her reputation had preceded her) and by the shouts and hoots of encouragement from her own school mates, who had turned out in droves. The battle lines were drawn, and she had been crowned the indisputable queen.

That is until…until she saw him…and he saw her.

Her mind; her needle sharp, intelligent, ever alert mind went blank while the rest of her came alive. It was as though she had been struck by a lightning bolt. Though she’d never had the experience, the sensation couldn’t be equated with anything else she’d been through.

He was the quiz master, new that year. A replacement to the old man, who with his sonorous voice and pompous attitude, had become passé and an object of ridicule.

Young, handsome, dynamic and self-assured, he was her ideal male counterpart— a person Ruhi believed didn’t exist. So far, that is.

She was instantly thrown off her moorings. Try hard as she could, it proved impossible to wrench him off her sphere of vision. And so it appeared, it was his lot as well. For even while posing questions to the other teams, she remained his singular object of interest.

And when it was her turn, every single time, her answers would freeze in her throat. She could do nothing but stare blankly at him like a mute numbskull, and he would stare right back.

Was it love at first sight? No. That was silly adolescent crap. It was more than that. It was desire. A raw naked, primal want that she recognized in those brazen eyes, and it made the heat rise to her cheeks.

That was it. She was finished. He had stolen her thunder and she had been dethroned even before the coronation.

The cheers turned into boos as her school lost again, and this time, by an unheard of margin. Ruhi left the stage acutely embarrassed by the defeat, but what pained her even more was the deep yearning that would remain unfulfilled.

It was a lonely trip home.

But somewhere along the way, she was accosted and forced into an alley, then trapped in a rough yet sensual embrace. A pair of hands roamed over her nubile body in such a familiar manner that her knees turned to water. She would have collapsed to the ground had he not held her up.

Turning her around, he asked a simple question, “Will you run away with me?”

There was no way she could refuse. 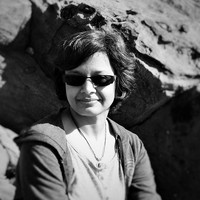 Simi K. Rao was born and grew up in India before relocating to the U.S., where she has lived for several years.
The inspiration for her books, and other projects, comes from her own experience with cross-cultural traditions, lifestyles and familial relationships, as well as stories and anecdotes collected from friends, family and acquaintances.
Rao enjoys exploring the dynamics of contemporary American culture blended with Indian customs and heritage to reflect the challenges and opportunities many Indian-American women face in real life.
Much of Rao’s down time is devoted to creative pursuits, including writing fiction, poetry and photography. She is an avid traveler and has visited many locations around the world.
A practicing physician, Rao lives in Denver with her family.
Website│Goodreads│Facebook│Twitter