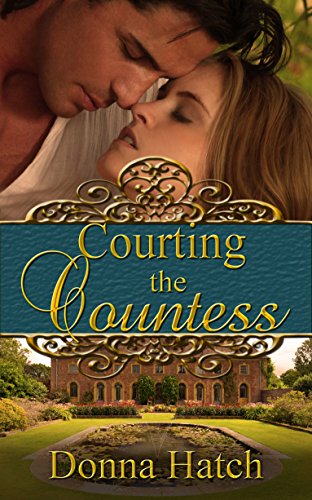 When charming rake Tristan Barrett sweeps Lady Elizabeth off her feet, stealing both her heart and a kiss in a secluded garden, her brother challenges Tristan to a duel. The only way to save her brother and Tristan from harm—not to mention preserve her reputation—is to get married. But her father, the Duke of Pemberton, refuses to allow his daughter to marry anyone but a titled lord. The duke demands that Elizabeth marry Tristan’s older brother, Richard, the Earl of Averston. Now Elizabeth must give up Tristan to marry a man who despises her, a man who loves another, a man she’ll never love.

Richard fears Elizabeth is as untrustworthy as his mother, who ran off with another man. However, to protect his brother from a duel and their family name from further scandal, he agrees to the wedding, certain his new bride will betray him. Yet when Elizabeth turns his house upside down and worms her way into his reluctant heart, Richard suspects he can’t live without his new countess. Will she stay with him or is it too little, too late?

Rules of Dueling in Regency England

In England, dueling was part of a long-standing code of honor, far beyond a mere tradition. Gentlemen took their dueling very seriously; they would rather die than be dishonored. Does your heart go pitter patter just at the sound of that? I admit, at time, mine does. How many man that honorable do you know? Okay, maybe we’d call it misplaced pride, or an overdeveloped sense of vengeance, but hey, that was a different world with a different set of rules. And yeah, I’m glad people don’t really do it these days.

Unlike previous era, by the Regency, dueling was outlawed. However, duels still happened more frequently than many people knew. The problem was, even if gentlemen were caught, the courts were made up of peers who were reluctant to charge another peer with murder as a result of a duel. There is a case where one nobleman was charged with murder and tried, but used the defense that his behavior was gentlemanly and honorable, meaning that he acted within the proper code of conduct. He was acquitted by his peers.

If the gentlemen involved were socially equal, or at least similar, the gentleman who was offended would tell the man who’d wronged him that he should choose his “second,” a close friend or family member who would look out for his best interests. If he was really incensed, he might slap him with his glove, but that was considered extreme and beneath gentlemanly behavior, as it was the ultimate insult, and probably resulted in a fist fight then and there.

The procedure for issuing a challenge was very specific and strictly followed. A gentleman never challenged a social inferior. For instance, a gentleman of significance with ties to the aristocracy or nobility would never challenge a member of the working class, such as a blacksmith or a farmer. Also, if there was a significant age difference, the duel would not be extended because one would have an advantage.

After the verbal challenge – or perhaps warning would be a better word – was issued, depending on the severity of the offense, the one in the wrong might have a choice; he could either apologize, or he could accept the challenge. Sometimes, an offered apology would not be accepted, especially if there were a third person who’d been wronged such as a lady’s honor. (Okay, call me crazy but that almost makes me want to swoon.)

The next day, supposedly after heads had cooled, the wronged man who wished to duel would send his “second” with a written letter challenging a duel. The one who’d given offense may apologize or may accept the challenge. If accepted, he would choose swords or pistols and name the time and the place. In my humble opinion, using swords was a more gentlemanly way to duel. Pistols seems too much like cold-blooded murder, although opponents could only take one shot. I’m sure they didn’t always shoot to kill, but there was some unwritten rule about the shot purposely going wide and that being bad form. *shrug* Regardless, it must have taken a great deal of courage and steady nerves.

When the allotted day arrived, they met in a remote place where they wouldn’t be caught by the law. There the friends serving as seconds inspected the weapons to be used. A final opportunity for an apology could possibly be given. If not, the seconds decided if the duel by swords should be fought to (a) first blood, or (b) until one can no longer stand, or (c) to the death. Once that was decided, the opponents dueled while the seconds watched to insure nothing dishonorable happened.

If during the course of a duel by swords, one of the duelers becomes too injured to continue, occasionally the second would step in and continue. Sometimes, the seconds were hot-headed or very angry (loyal?) and ended up dueling each other as well. To my knowledge, this never happened if the duel were fought with pistols.

As horrible as it sounds to our modern selves, these gentlemen took their honor very seriously, and considered death preferable to living with the label of a coward, a label that would follow them and their families for years.

And, maybe it’s me, but there a certain romance about a gentleman brave enough and protective enough to be willing to risk death defending a lady’s honor, or his own, from another man who’d besmirched it.

A duel leads to all the trouble for my hero in my Regency Romance novel, Courting the Countess and causes events he wishes desperately he could change, especially when the duel goes awry and causes pain to an entire family.

I’m glad my husband isn’t likely to challenge someone to a duel.

Donna Hatch is the author of the best-selling “Rogue Hearts Series,” and a winner of writing awards such as The Golden Quill and the International Digital Award. A hopeless romantic and adventurer at heart, she discovered her writing passion at the tender age of 8 and has been listening to those voices ever since. She has become a sought-after workshop presenter, and also juggles freelance editing, multiple volunteer positions, and most of all, her six children (seven, counting her husband). A native of Arizona who recently transplanted to the Pacific Northwest, she and her husband of over twenty five years are living proof that there really is a happily ever after.

10 thoughts on “#BlogTour #Giveaway – COURTING THE COUNTESS by Donna Hatch”