The Darlings are a warm, loud, slightly boundary-challenged family of 4 adult sisters and a brother. The first in a 3-part series, All Right Here, is about Ivy Darling and her husband Nick Mason, a couple with a crumbling marriage, who struggle with infertility. When the 3 kids next door are abandoned by their mother, Ivy & Nick unwittingly become foster parents to the only black children in the town of Copper Cove, Maine. Even as Ivy grows more attached to the kids, Nick refuses to accept their unorthodox household as a permanent family. With their relationship spiraling down fast, Ivy has to decide whether or not she still cares enough to try to save her marriage. A book about faith, family and most of all, forgiveness.

I enjoyed the concept of this book. Foster parents play a large part in children(s)’ lives growing up. They provide a loving and caring support system when the bloodline system is lacking or has failed. This is a relate-able storyline for a fiction novel. I look forward to reading the rest of the books in this series.

Ivy Darling can’t have children of her own, and her husband Nick’s resentment is forcing them apart. And while Ivy has the support and love of her large, close-knit family, Nick’s family has never welcomed her into the fold.

When the three children next door are abandoned by their mother, Ivy and Nick take them in for the night. One night becomes several, and suddenly Ivy and Nick find themselves foster parents to the only African-American kids in the town of Copper Cove, Maine. As Ivy grows more attached to the children, Nick refuses to accept their eclectic household as a permanent family. Just as Ivy begins to question whether or not she wants to save her emotionally barren marriage, Nick begins to discover how much Ivy and the children mean to him. But is his change of heart too little, too late?

I have enjoyed reading this series! What Book 1 missed, Book 2 brought! Each book follows a different Darling sister and that sister’s dilemmas while still incorporating the other sisters’ drama as well. I flew through this book laying next to the pool in one day – quick, easy, and enjoyable! You could read this as a standalone book but I think you would fully appreciate the story if you read the series in order.

Sephy Darling knows how to take care of everyone but herself. As “the fat Darling sister,” she’s learned to be comfortable in the background. When a friend’s happiness causes her to take a hard look at her own life, Sephy decides it’s time for a big change. But transforming the outside turns out to involve more inward metamorphosis–and courage–than she ever bargained for.

There’s no doubt that when it comes to launching Copper Cove’s new community arts program, Amy Darling is the woman for the job. She may be young, but she has the creativity, drive, and vision to get it done right. Unfortunately, nobody else seems willing to work as hard as she does, and the contractor who’s renovating the arts center won’t cooperate at all. Meanwhile, a Darling family wedding will test everyone’s ability to get along.
Move with the Darling sisters through heartbreak and triumph as each finds her own path into the freedom of being who God made her to be. 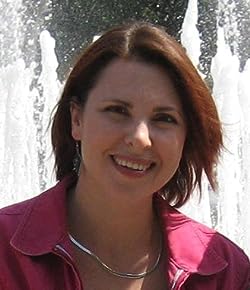 Carre writes from the big small town of Portland, Maine, where she’s the mom of 3 teenagers and 2 dogs she would rather not own. (Only the dogs, not the teenagers.) From 2007 to 2010, she and her family lived in Russia, studying the language and doing humanitarian work.

Like most writers, Carre grew up with her a book always in her hand. The heroines she admired most were smart, creative, independent thinkers like Anne Shirley, Laura Ingalls Wilder, Nancy Drew, and Cherry Ames. Nancy proved that being a girl detective might just be the coolest career ever, but Cherry taught her that nursing was more practical. Carre compromised by becoming a nurse and marrying a sleuth.

Nearly every flat surface in Carre’s home has books on it. The stories she loves most are those about the ordinary lives of ordinary people; she thinks of every life as a fascinating drama. Isn’t each one of us the hero of our own story? She’d love for you to drop her a line and tell her yours!